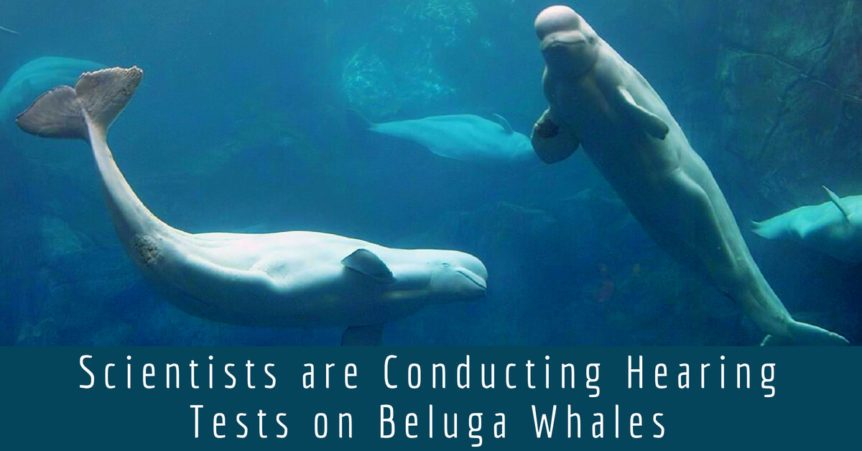 Beluga whales have long been studied for their intelligence, migration and social habits. Now, new research has just been released about the hearing ability of belugas. It’s the first time hearing has been studied in a wild population of sea mammals. What did they find? In contrast to populations of dolphins living in captivity, wild belugas had a sharp sense of hearing that remains intact throughout their lifespan.

How Do You Test A Whale’s Hearing?

As with any study of wild populations of animals, researchers set out to disrupt the lives of their subjects as little as possible. In studying adult belugas, the animals were led to shallow water with soft nets. The belugas had their tails temporarily secured and were placed on a stretcher (called a “belly band”) next to an inflatable raft where the testing was done.

Hearing tests were administered by gathering data from two sensors place on the whales with suction discs. One sensor was placed behind the dorsal blowhole, above the beluga’s ear hole, and a second sensor was placed further on their back. The sensors measure brain activity and reaction to sound. To test hearing, a series of soft tones are played and the whale’s response is monitored and recorded.

The beluga hearing test is painless and harmless to the whales, who were released back to their pod immediately after being tested. The tests were adapted from techniques used to detect hearing issues in babies.

The beluga study found that these mammals have an acute sense of hearing and are capable of responding to subtle sounds. The study also found that older belugas did not experience hearing loss nearly as severely as previously studied populations of captive sea mammals.

Dolphins have long been studied to discern their speech and hearing patterns, but all research on the hearing of dolphins has thus far been conducted on captive populations. Captive dolphins, often in the environment of large aquariums, are frequently exposed to noise conditions more comparable urban human settings rather than the soundscape of open water. Hearing loss has been found to be prevalent in these populations of captive dolphins, similar to patterns of hearing loss in aging human adults.

The beluga population under observation was based off of Bristol Bay, Alaska where general noise levels are much lower. Even the older beluga whales in this setting demonstrated little difficulty with their hearing, which leads researchers to believe much of the previously observed hearing loss in dolphins is almost certainly noise-related.

The Importance of Beluga Hearing

The research into beluga hearing not only increased our understanding of their baseline hearing health but helped develop our picture of how and when belugas navigate their ocean surroundings. Beluga whales may rely on their hearing to help map their migratory paths through the ocean. Belugas also use their hearing to stay alive, as their hearing alerts them to the approach of predators as well as signals of distress and alarm from other belugas. Without a developed sense of hearing, beluga whales become decidedly more vulnerable to threats in their environment.

Part of the recent beluga study, based from the Woods Hole Oceanographic Institute is to establish data on the influence of human interference on animal populations and to protect animals from potential harm, including noise pollution.

With an increase in human activities offshore and increasingly on coastal lands, scientists are racing to keep up with what the environmental and biological cost of human development will be. For whales with stable, lifelong hearing human interference could present a host of new health issues, hearing loss amongst them.

With increasing human-driven pressures on marine life, preventing further damage is key in species preservation. The new research from WHOI could be the first in a new wave of data on the impact of busier, noisier oceans on marine mammal hearing and health.

We can’t all be lucky as wild beluga whales – for most humans, experiencing hearing loss as we age is a likely reality. Hearing loss doesn’t have to hold you back, though. At Better Hearing Center we help you connect with effective treatment and solutions for managing hearing issues. If you’re looking for great hearing care in the Seattle, Washington area, look no further than Better Hearing Center, and set up an appointment today!